What do bees do in spring & summer?

Busy as a bee really applies to this season.   The baby bees are hatching and the room in the hive is at a premium.  This is the time when bee keepers will be adding additional boxes onto the hive to give more room for the growing bee numbers.  This photo shows a brand new bee hatching from its cell.  This is called a brood cell which is why the capping on top of the honey comb appears thicker and different in colour from the capping you see on the honey comb that you eat.

At the end of spring and the beginning of summer it is time to start dividing the hives to create new hives.  It is also the time beekeepers introduce new queens into the baby hives, known as nucs.   At this time of year the bees need lots of attention.  In this picture Chas is making sure the bees have enough room to store honey so that they don’t swarm.  On the warmer days the bees are out collecting nectar and on the cool days it is just a stay at home day. 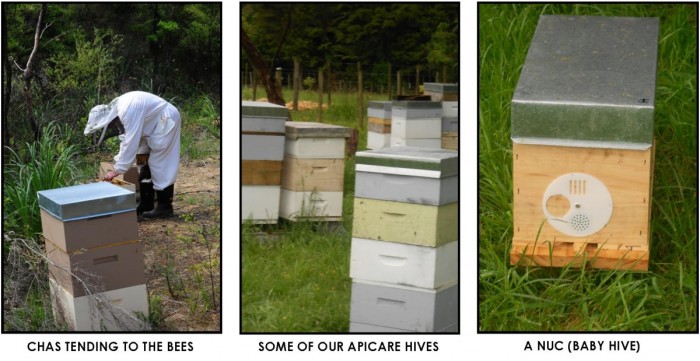 During the warm summer weather the bees are busy working outdoors and producing lots of honey.  Their numbers are increasing and they need more space.  This is the time of year you may start to see the odd swarm in the air.  There are a number of reasons that hives swarm but one of the main ones is that they are becoming crowded as summer nears.  Chas was called to a friend’s house a couple of weekends back after they discovered a swarm on their property.  He got some great photos.

The bees hang in a mass around the queen keeping her warm and ensuring she is safe.  If alternative accommodation is provided for them they will happily take up residence.

In order to get the swarm down the branch is shaken over an open bee box.  Most fall directly into the box, those that land on the grass then go about moving their way inside to join the rest of their hive.  If you discover a swarm your local beekeepers association can put you in contact with a beekeeper in your area to collect it for you.  Here is a link to the National Beekeepers Association directory https://apinz.org.nz/swarm-collection/ 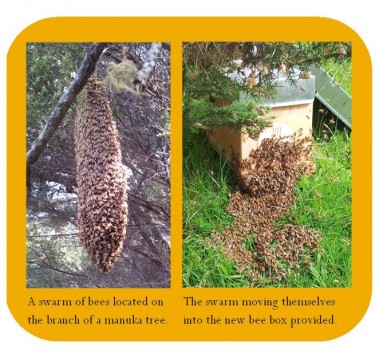 What do bees do in winter?

Ever noticed that there are not as many bees around during the winter months?  This is because they stay inside their hive in what is called a winter cluster, which means they get into a big huddle. There is little point flying outside of the hive as there are very few flowers in bloom, hence little pollen or nectar is available. The colder the temperature the more compact the cluster becomes.

In the hive where they live, worker bees regulate the temperature with great exactness. They keep it at 34 degrees Centigrade where the young bees are being developed, and they do not let the colony temperature fall below 7 degrees. Honey stored in the hive during summer is used as fuel by the bees during the winter months.  Clever little things aren't they!

There are three kinds of bees in a hive:  The queen, the worker and the drone.

The female worker bees live for only around 40 days or so, and the male drone bees die in mating or are evicted from the hive in the autumn (to conserve food as they do no actual work).  The queen bee however can live for up to five years.

If the queen bee dies the worker bees know because they stop smelling her pheromones.  If she dies prematurely, the worker bees immediately start doing what is necessary to create a new queen from existing larvae that has not yet hatched.  As long as there are larvae present that are less than three days old, they can be converted into a queen bee.

The female worker bee is assigned jobs based on her age.  She does not even leave the hive for the first three weeks.

Bees are the only insect in the world that make food for humans.  They collect both nectar and pollen from flowers.  It is the nectar that they use to make honey.  They do this by mixing the nectar they gather from the available floral sources with enzymes from glands in their mouths.  This is then stored in hexagonal wax honeycombs until the water content has been reduced to around 17%.  Once this happens, worker bees cap the combs with a wax seal until it is harvested or until the bees need it for food (over the winter months).

Bees carry the pollen they gather in a pouch on their hind legs, called a pollen basket, which they use to transport the pollen back to their hive.  Pollen is a source of protein for the hive and is needed to feed the baby bees to help them grow.

The pollen that bees collect comes in a variety of different shades depending on the floral source that they have collected it from.  When a bee is out foraging it collects only one type of pollen in each trip so that the excess pollen it drops will go to a plant in the same family.  For example, a bee may go from apple blossom to apple blossom.  She doesn't care if they are not the same varieties of apples as long as they are apples.  Any excess pollen that is not packed into the pollen baskets on her back legs stays on the hairy parts of her body until it falls off onto the stigma of the next flower the bee lands on.  That pollinates it so it will produce seeds for the next generation of that plant.  About one-third of the total human diet comes directly or indirectly from insect pollinated fruits, legumes and vegetables.  Hence the global interest in combating the decline in honeybee numbers. 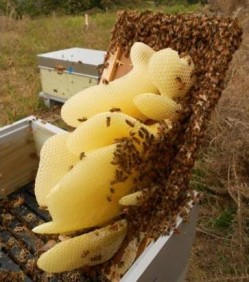 Chas was out tending the hives a while back and came across this amazing section of natural honey comb.  This intriguing photo shows some honey comb that was created in an empty bee box adjacent to an existing hive in a matter of just seven days.  When no bee frames are present the bees create honey comb in this manner just as they would in a wild hive.  Bees need to be kept on removeable frames by law (to control disease) so Chas shook them down to the box and frames below and they have taken up residence there.  The honey comb has been recycled into new honey comb for the bee hive frames.

Propolis is another amazing compound created by the honey bee & found within the hive.  It is a dark brown resinous mixture which is made up of over 50 constituents.  Typically it contains 50% resins and vegetable balsams, 30% waxes, 10% essential oils and 5%+ pollen.  The bees use it to fill gaps in the hive to keep their hive healthy.

It is believed they use propolis to:

The use of propolis in the hive creates a highly complex immune defence system which makes the bee hive the most sterile environment known in nature. Propolis is receiving significant investigation in the scientific community and laboratory tests are showing it to have anti-microbial and anti-tumour properties, immunostimulant effects and a role in dental care to name a few benefits.

Both our lip balms (protect me & revive me) and our manuka therapy 30% skin creme contain New Zealand Propolis.